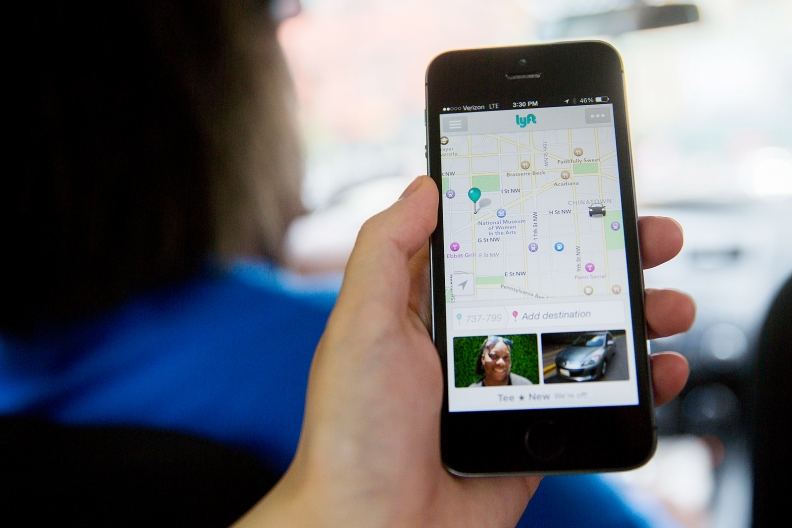 SAN FRANCISCO — Uber Technologies Inc. and Lyft Inc. are racing to recruit drivers to spur the growth of their ride-sharing businesses. Stefanie Leifer recently found herself caught in the middle.

Leifer has worked for San Francisco-based Lyft, the mobile application that lets people hail rides from cars festooned with pink mustaches, for the past year.

In May, she picked up a passenger who was working for Uber and tried to convince her to switch sides, she said.

That same month, Uber dangled a $500 bonus to Lyft drivers to attract them to Uber instead. The 34-year-old part-time attorney gave in when Uber offered her a $1,000 bonus and a guaranteed $45-a-hour for driving at peak times during the month of June.

Leifer worked exclusively for Uber last month and is now ferrying passengers in a Lexus IS250 for both services in San Francisco, highlighting the grab for drivers as the companies work to up- end the transport industry.

“This competition is very good for me,” Leifer said in an interview, adding that she’s “making more money now than as an attorney.”

Drivers are independent contractors who can work for multiple companies at the same time. They typically own their car and can make as much as $8,000 a month, depending on how long they’re on the road and excluding insurance, gas and other costs.

The rivalry for drivers is unfolding across the U.S., as both companies rush to expand services — most recently in New York.

Lyft was poised to start operating there last week, bringing more competition to Uber — though its effort is on hold amid opposition from New York state authorities.

As they seek to attract drivers and expand into new cities, the companies have garnered new war chests of cash from investors this year, with Lyft collecting $250 million in a funding round in April. Uber last month raised $1.2 billion at a $17 billion valuation.

Some of that money is now going toward attracting drivers, who are key to Uber and Lyft’s ambitions to crack open the U.S. taxi and limousine market, estimated to be an $11 billion industry, according to IbisWorld Research.

In their recruitment efforts, the car-booking companies aren’t only taking on each other, but also taxis, local limousine services and other car-sharing apps such as Side.cr and Hailo Network, their founders have said.

“The battle for drivers is intense,” said Lyft CEO Logan Green, who founded the startup with John Zimmer in 2012. While Lyft has to tussle with Uber and the taxis, “it’s great for drivers and ultimately for passengers,” he said.

For Uber, more drivers are important to establishing itself as the biggest car-booking provider, boosting opportunities for drivers and the value of the service for customers, co-founder and CEO Travis Kalanick said in May at the Re/Code technology conference.

“The more drivers on the system, the more trips per hour a driver can do,” Kalanick said. “It means pick-up times are low, prices come down.”

While Uber is the market leader, it’s also facing challenges on multiple fronts.

Comments Off on Best lyft code for new users