What Is a FICO Score?

A FICO score is a type of credit score created by the Fair Isaac Corporation. Lenders use borrowers’ FICO scores along with other details on borrowers’ credit reports to assess credit risk and determine whether to extend credit. FICO scores take into account various factors in five areas to determine creditworthiness: payment history, current level of indebtedness, types of credit used, length of credit history, and new credit accounts.

FICO (formerly the Fair Isaac Corporation) is a major analytics software company that provides products and services to both businesses and consumers. Previously known as the Fair Isaac Corporation, the company changed its name to FICO in 2009 and is best known for producing the most widely used consumer credit scores that financial institutions use in deciding whether to lend money or issue credit.

FICO scores range between 300 and 850. In general, scores above 650 indicate a very good credit history. In contrast, individuals with scores below 620 often find it difficult to obtain financing at favorable rates. To determine creditworthiness, lenders take a borrower’s FICO score into account but also consider other details such as income, how long the borrower has been at his job and type of credit requested.

More banks and lenders use FICO to make credit decisions than any other scoring or reporting model. Although borrowers can explain negative items in their credit report, the fact remains that having a low FICO score is a deal breaker with numerous lenders. Many lenders, particularly in the mortgage industry, maintain hard-and-fast FICO minimums for approval. One point below this threshold results in a denial. Therefore, a strong argument exists that borrowers should prioritize FICO above all bureaus when trying to build or improve credit.

Achieving a high FICO score requires having a mix of credit accounts and maintaining an excellent payment history. Borrowers should also show restraint by keeping their credit card balances well below their limits. Maxing out credit cards, paying late, and applying for new credit haphazardly are all things that lower FICO scores.

To determine credit scores, the Fair Isaac Corporation weighs each category differently for each individual. However, in general, payment history is 35% of the score, accounts owed is 30%, length of credit history is 15%, new credit is 10% and credit mix is 10%. The major factors used in a FICO score are:

FICO scores range from 300 to 850, where 850 is considered to be the best score achievable.

Payment history refers to whether an individual pays his credit accounts on time. Credit reports show the payments submitted for each line of credit, and the reports indicate if the payments were received 30, 60, 90, 120 or more days late.

Accounts owed refers to the amount of money an individual owes. Having a lot of debt does not necessarily equate to low credit scores. Rather, FICO considers the ratio of money owed to the amount of credit available. To illustrate, an individual who owes $10,000 but has all of his lines of credit fully extended and all of his credit cards maxed out may have a lower credit score than an individual who owes $100,000 but is not close to the limit on any of his accounts.

As a general rule of thumb, the longer an individual has had credit, the better his score. However, with favorable scores in the other categories, even someone with a short credit history can have a good score. FICO scores take into account how long the oldest account has been open, the age of the newest account and the overall average.

Credit mix is the variety of accounts. To obtain high credit scores, individuals need a strong mix of retail accounts, credit cards, installment loans such as signature loans or vehicle loans, and mortgages.

New credit refers to recently opened accounts. If the borrower has opened a bunch of new accounts in a short period of time, that indicates risk and lowers his score. 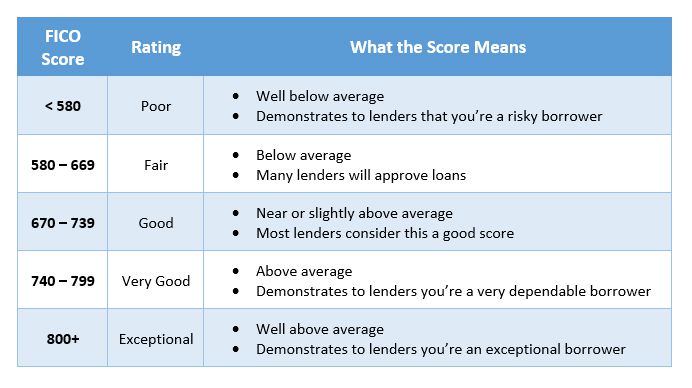 Different versions of FICO exist because the company has periodically updated its calculation methods over its history since it first introduced a base score in version 1 back in 1989. Every new version is released to the market and made available for all lenders to use, but it is up to each lender to determine if and when to implement an upgrade to the latest version.

The most current version, FICO 8 (or 08), was introduced in 2009 as the base scoring algorithm. According to FICO, this system “is consistent with previous versions” but “there are several unique features that make FICO score 8 a more predictive score” than prior versions. FICO 8 was introduced in 2009.

Like all prior FICO score systems, FICO 8 attempts to convey how responsibly and effectively an individual borrower interacts with debt. Scores tend to be higher for those who pay their bills on time, keep low credit card balances and only open new accounts for targeted purchases. Conversely, lower scores are attributed to those who are frequently delinquent, over-leveraged, or frivolous in their credit decisions. It also completely ignores collection accounts in which the original balance is less than $100.

The additions to FICO score 8 include increased sensitivity two highly utilized credit cards—meaning that low credit card balances on active cards can more positively influence a borrower’s score. FICO 8 also treats isolated late payments more judiciously than past versions. “If the late payment is an isolated event and other accounts are in good standing,” says FICO, “Score 8 is more forgiving.” FICO 8 also divides consumers into more categories to provide a better statistical representation of risk. The primary purpose of this change was to keep borrowers with little to no credit history from being graded on the same curve as those with robust credit histories.

FICO score 5 is one alternative to FICO score 8 that is still prevalent in auto lending, credit cards, and mortgages.

Fair Isaac released the FICO Score 9 in 2016, with adjustments to the treatment of medical collection accounts, increased sensitivity to rental history and a more forgiving approach to fully paid third-party collections. None of the major credit bureaus, however, has adopted the new version to date.

Comments Off on Fico rate