Hurricane Isaac 2018 update: Still a Category 1 on path for Caribbean 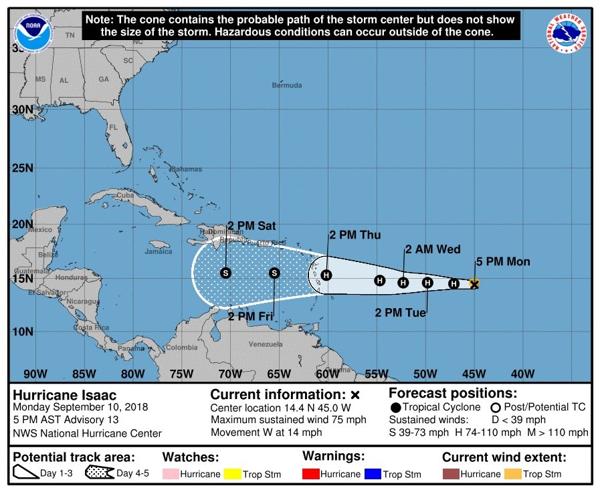 Hurricane Isaac remained a minimal hurricane on Monday afternoon and continued to track westward on a path that could bring it across the Lesser Antilles by Thursday.

And if that wasn’t enough the National Hurricane Center is also watching a disturbance already in the Caribbean that could become a tropical depression in the Gulf of Mexico later this week.

But first Isaac. As of 4 p.m. CDT Monday, Hurricane Isaac was located about 1,090 miles east of the Winward Islands and was moving west at 14 mph.

While Isaac hasn’t gained any strength today that could change over the next day or two. Forecasters said Monday afternoon that they weren’t sure why Isaac hasn’t intensified yet.

The hurricane center said weakening should begin by the middle of the week as Isaac nears the Lesser Antilles.

The hurricane center thinks, however, that Isaac will be near or at hurricane strength when it reaches the islands.

Isaac is forecast to continue moving west and pick up a bit of speed through the end of the week.

On that path it will move across the Lesser Antilles on Thursday. The hurricane center said watches may be needed for the islands on Tuesday.

However, the hurricane center noted that confidence in Isaac’s track forecast is on the low side.

That’s because forecast models are split into two factions on its path.

One set of models suggests Isaac could recurve near or east of the Lesser Antilles and miss the islands all together.

However some of the more reliable models show a consistent westward motion across the islands and into the eastern Caribbean.

The hurricane center is sticking with the westward path for now but added a disclaimer: “Given the spread in the guidance, the confidence in the details of the track forecast beyond the first couple of days is larger than usual.”

Isaac is a small storm, and its strongest winds extend out from the center only about 10 miles.

The hurricane center said the intensity forecast is also difficult.

Storms that small are notoriously challenging to predict because they are more susceptible to environmental changes around them.

Models are also disagree on how how strong — or weak — Isaac will be.

Some models suggest Isaac will steadily weaken as it encounters wind shear in a few days. But yet another one shows Isaac becoming a major hurricane.

Isaac is one of three hurricanes in the Atlantic on Monday.

There’s also Florence, which is a Category 4 as of Monday afternoon and forecast to strike the U.S. as a major hurricane this week, and Category 2 Helene, which is in the far eastern Atlantic and not forecast to affect land.

The hurricane center is also watching a disturbance in the northwest Caribbean that could move into the Gulf of Mexico in a few days.

The hurricane center raised the odds of development to 50 percent on Monday afternoon and said a tropical depression could form Thursday or Friday in the western Gulf.

It was forecast to stay on a west-northwest to northwest path.