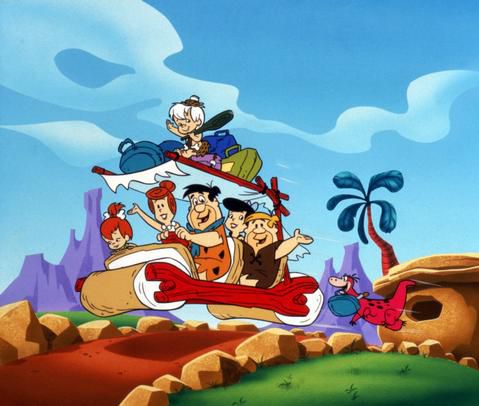 Fred and Wilma, Barney and Betty

The Flintstones pictures are a fun look back at the first major primetime animated series, which was created by the legendary team of William Hanna and Joseph Barbera. The Flintstones premiered in ABC on September 30, 1960. Originally titled The Flagstones, The Flintstones was the first cartoon made for television and made for an adult audience. Alan Reed provided the iconic voice of Fred Flintstone, while veteran voice actors Daws Butler, Mel Blanc and Hal Smith were the voice of Barney Rubble.

The Flintstones was modeled after the most popular TV show on the air at the time: The Honeymooners. You might notice that Fred Flintstone bears a striking resemblance to Jackie Gleason, and that Barney Rubble is the same kind of sidekick that Art Carney played.

Hard to believe, but The Flintstones never won an Emmy award. In 1961, The Flintstones was nominated for a Primetime Emmy Award for Outstanding Program Achievement in the Field of Humor. However, the series held the record for the longest running prime-time animated series, before The Simpsons took the honor.