Tropical storm Bonnie graduated to Hurricane Bonnie overnight, and stayed on a track that could make the CAMEX-3 team evacuate Patrick Air Force Base, Fla., for Warner Robbins Air Force Base south of Macon, Ga.

Right: A GOES-8 image of Bonnie as it churns the Atlantic Ocean north of the Windward Islands. Current images are available through the interactive viewer at the Global Hydrology and Climate Center. (links to

“It is ironic that what we came to Florida to study, might just drive us to our alternate staging base,” said Robbie Hood, mission scientist from the Global Hydrology and Climate Center at NASA’s Marshall Space Flight Center in Huntsville, Ala.

Despite the impending move, the CAMEX-3 team has started its science campaign.

The team stayed on the ground Wednesday to have more time to prepare for flight operations. On Thursday, the NASA DC-8 and the University of North Dakota Citation took off at noon EDT from Patrick 5-hour flight to study a wide band of maritime rain off Cape Canaveral. Both aircraft performed spiraling maneuvers down through the rain to study the sizes of cloud ice crystals and raindrops. The aircraft also flew under the Tropical Rainfall Measuring Mission (TRMM) satellite at 2:42 EDT. 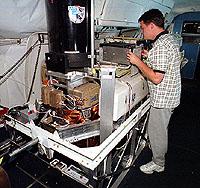 The DC-8 flew part of the mission with the NOAA Gulfstream IV. The Lidar Atmospheric Sensing Experiment (LASE) from NASA’s Langley Research Center had a very successful mission. Ed Browell, who was the DC-8 mission scientist for this flight, was very impressed with the variety of aerosols and water vapor conditions encountered during the flight.

Left: NASA/Langley’s Lidar Atmospheric Sensing Experiment (LASE) sits on a special pallet inside the DC-8 research aircraft. The black cylinder houses the optics that aim the laser into the air and receives the return signal. (links to

The total time for the DC-8 mission should have been 8 hours. but the actual time was over 9 hours. The mission was lengthened because of unfavorable wind conditions at the landing time. The DC-8 was forced to circle Patrick AFB until the landing conditions improved.

The current plan for today is for the NASA and NOAA WP-3 Orion aircraft to have a “no fly” day. The NASA DC-8 and ER-2 may be asked to leave Patrick if the hurricane forecasts predict unfavorable 92 km/h (58 mph, or 50 kt; see the note below on measurements) winds of Bonnie to reach Patrick within 48 hours. If the aircraft are asked to leave, then a mission over Bonnie will be attempted before recovering the aircraft at Warner Robbins AFB. The first meeting to discuss this possibility was scheduled for 9 am EDT at Patrick.

To date, CAMEX-2 has concentrated on measuring tropical thunderstorms.

CAMEX forecaster J. Halverson, in the daily CAMEX forecast, wrote that hurricane reconnaissance aircraft report Bonnie has a closed eyewall, and flight level winds of 140 km/h (87 mph, 76 kts) and minimum pressure of 987 mb (lower pressures mean stronger storms). Its direction is west-northwest (300 deg) at 28 km/h (17 mph, 15 kts), and reflects a slow turning toward the northwest. The latest large-scale models suggest a weakening of the ridge and steering flow, and approach of a shortwave trough. This argues for more of a turn toward the northwest and deceleration of the storm.

The NOAA Geophysical Fluid Dynamics Laboratory’s (GFDL) forecast track continues to the left of the ensemble, but its 72-hour period has ended up to the left of the actual track. The official NOAA track forecast is now to the right of the GFDL. Further strengthening is likely with excellent upper level outflow and an eye is now becoming visible. Bonnie is forecast to become a major hurricane, with winds 184 km/h (115 mph, 100 kts) or greater by Sunday night and has the potential to become a Saffir-Simpson Category 3 storm.

In Florida, the Cape morning sounding shows deep moisture and easterly flow. Morning, scattered convection has prevailed along the east coast. East winds of 28 km/h (17 mph, 15 kts) will prevail at Patrick today. With the approach of Bonnie, subsidence in advance of the vortex center will begin to induce drying through the middle and upper troposphere. This will begin to suppress convection across the eastern half of the peninsula late today and into tonight. Winds will also begin to shift around to northeasterly at about 18 km/h (12 mph, 10 kts) late tonight.

Left: A composite of two National Hurricane Center maps depicts the locations of Bonnie and Charlie on Saturday morning. (Links to

Over the next 3 to 5 days, as Bonnie passes to the north and east of Central Florida, winds will gradually shift through westerly and then southwesterly and weaken. Deep layer moisture should return as subsidence relaxes, and we will see a return to sea-breeze induced convection. But what could go wrong? Bonnie could slow or stall offshore to our north. Tropical Depression 4 (which would become Danielle) could develop and threaten the southeast again.

Welcome to hurricane season in Florida!

Note: More details are available in the NASA press release describing CAMEX-3. Check back as hurricane season progresses. We will post science updates as the campaign develops.

NCAR has an extensive writeup on the GPS dropsondes used in CAMEX-3 and other atmospheric campaigns.

A new study – not related to CAMEX-3 – by the Arizona State University suggests a link between hurricanes in the northwest Atlantic and air pollution.

CAMEX-3 – the third Convection and Moisture Experiment – is an interagency project to measure hurricane dynamics at high altitude, a method never employed before over Atlantic storms. From this, scientists hope to understand better how hurricanes are powered and to improve the tools they use to predict hurricane intensity.

An overview story (Aug. 12, 1998) describes the program in detail. The study is part of NASA’s Earth Science enterprise to better understand the total Earth system and the effects of natural and human-induced changes on the global environment.