HURRICANE ERICK is tracking across the Central Pacific towards Hawaii but how will the strengthening system impact Hawaii’s weather? Here is the latest NWS forecast.

Hurricane Erick has intensified into a hurricane and crossed into the Central Pacific Ocean, tracking closer to Hawaii. The storm is the third hurricane of the 2019 East Pacific hurricane season, following Alvin and Barbara. Now Erick will continue to track westward toward Hawaii throughout the week and is likely to intensify.

AccuWeather Senior Meteorologist Alex Sosnowski said: “There is a high chance that Erick will become a major hurricane with maximum sustained winds of at least 111mph as the week progresses.”

The direct threat to Hawaii is not yet known but rough surf, storm surges and rip currents will impact Big Island according to AccuWeather Senior Meteorologist Carl Erickson.

Mr Erickson said: “Those with interests in Hawaii should monitor the progress of Erick this week.”

According to the National Hurricane Center (NHC) warns: “the environment around Erick will remain conducive for additional intensification during the next 36-48 hours.

“The latest forecast again indicates Erick may attain major hurricane status during the next couple of days.”

Maximum sustained winds were measured at close to 80 mph (130 km/h) with higher gusts, and further strengthening is forecast. 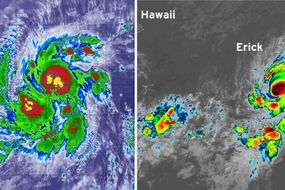 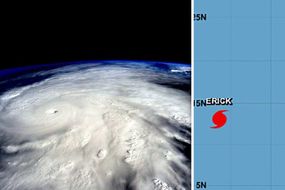 Large swells travelling outward from the storm will affect the east-facing beaches of the Big Island from midweek.

CNN meteorologist Haley Brink said it is still too early to know if rain bands from the storm will impact the island chain.

Hawaii weather: Heavy rain could also hit the island chain, and this could cause flash flooding (Image: CYCLOCANE)

Hawaii weather: Erick is forecast to strengthen yet again as it tracks across the Pacific (Image: NOAA)

Hawaii could also feel the force of a second weather system, which is not far behind Erick in the Eastern Pacific Ocean.

Tropical Storm Flossie is growing in strength as it tracks across the warm waters of the Pacific, with the National Oceanic and Atmospheric Administration (NOAA) anticipating Flossie to become a hurricane by Tuesday.

AccuWeather Senior Meteorologist Rob Miller said: “Environmental conditions will be conducive for Tropical Storm Flossie to strengthen as it moves in a general westward motion over the open waters of the East Pacific.”

As both storms continue to strengthen, NOAA will monitor them via radar.

Comments Off on Nws hurricane